Canada observes the National Day of Truth and Reconciliation every year on September 30. Instituted in 2013. This solemn day reflects on the tragic history of Canada’s Indian residential school system and mandatory boarding schools.

Remembering the victims, survivors, communities and families impacted by this sad history spurs Canadians to honour Indigenous peoples’ past, present, and future. Canadians can do this by participating in “Orange Shirt Day” and by spending their money wisely and using their financial power to support Indigenous small businesses.

In honour of the National Day of Truth and Reconciliation, let's take a look at the Indigenous population in Canada as a whole, and recognize why it's important to celebrate Indigenous entrepreneurship nationwide.

The Indigenous population in Canada

According to the 2016 census, more than 1.67 million people in Canada identify as Indigenous, making up roughly 4.9% of our population.

Furthermore, there are over 630 unique First Nation communities in Canada. This represents more than 50 nations and 50 Indigenous languages. In fact, as of 2017, the Indigenous population of Canada was growing 4 times quicker than the rest of the country, and it is considered the youngest and fastest growing Canadian demographic. Indigenous Canadians even have their own unique flag. 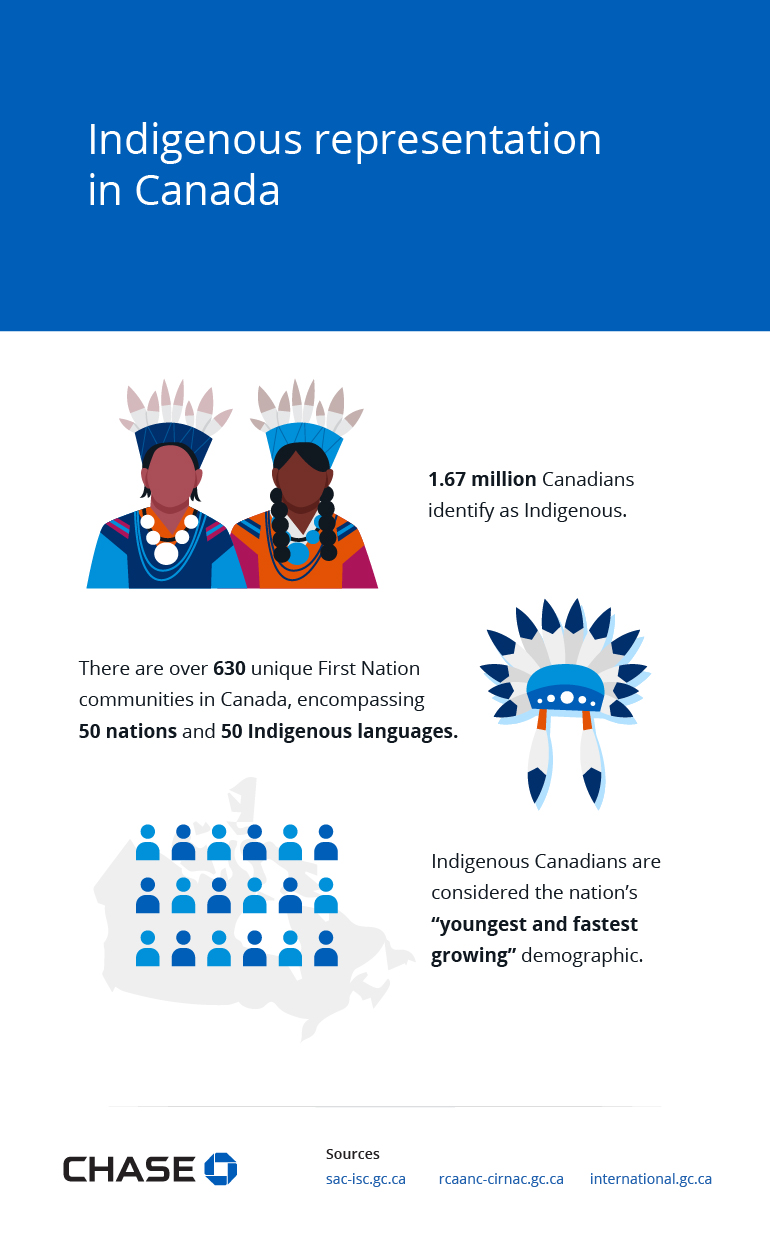 There are over 630 unique First Nation communities in Canada, encompassing 50 nations and 50 Indigenous languages.

Indigenous people contribute an estimated $30 billion to the national economy annually. They also have a significant role in Canada’s business sector.

2.5% of Canadian entrepreneurs are Indigenous, and there are approximately 13,770 Indigenous SMEs (small- and medium-sized enterprises) nationwide. Canada defines an SME as a “business which has between one and 499 paid employees, and at least $25,000 in revenues annually.”

Looking closer, many of these Indigenous small businesses garner serious profits: According to a government study, “half of Indigenous SMEs reported revenues between $50,000 and $1 million, and nearly one third reported earning between $1 million and $5 million in 2014.”

Terminology for the Indigenous population of Canada

As the Indigenous population has long suffered oppression, it's critical for customers, colleagues, and supporters to learn and use the proper terminology with utmost sensitivity.

Here’s an abridged exploration of different terms for Indigenous people:

Aboriginal. This refers to the first denizens of Canada. It includes First Nations, Inuit, and Métis peoples. The use of the term "Aboriginal" gained popularity in Canada after 1982. This is when Section 35 of the Canadian Constitution, which is on Indigenous Foundations, explicitly stated this.

First Nations. The term "First Nation" is used in the context of describing Aboriginal groups that, ethnically, aren't Inuit or Métis. The usage of "First Nations" became more prominent in the 1970s and 1980s as it replaced "Indian”.

The singular "First Nation" can point to a reserve-based community in Canada. Or it can refer to a band or larger tribal grouping.

Inuit. This refers to particular groups of people living in the far North. Inuit in Canada can be found in 53 communities that span across the northern regions of Canada in Inuit Nunangat.

Métis. While it can sometimes be used to refer to folks of mixed descent, the term Métis encompasses the collective ethnic identities that originated from unions among European people and Aboriginal folks.

Indian. The term “Indian” should only be used when referencing the legal identity of a First Nations person registered under the Indian Act. Outside of this, the term shouldn't be used, as it's outdated and commonly deemed offensive due to the history of misidentification of Indigenous Americans as Indians.

A note about the word "native": Among the Indigenous population in Canada, native doesn't refer to any particular Aboriginal identity. It’s a dated term and considered offensive by many. In turn, it's best to use one of the above-mentioned identifiers. Specificity and accuracy are always best when referring to a particular group.

Also note that this terminology is changing and will continue to evolve. If you're not sure if something is "wrong" or "incorrect”, don't be afraid to admit that you're unsure. Doing research, observing and engaging in empathic listening can help you gain a greater understanding and reveal a deeper sensitivity and awareness of proper terminology and usage. 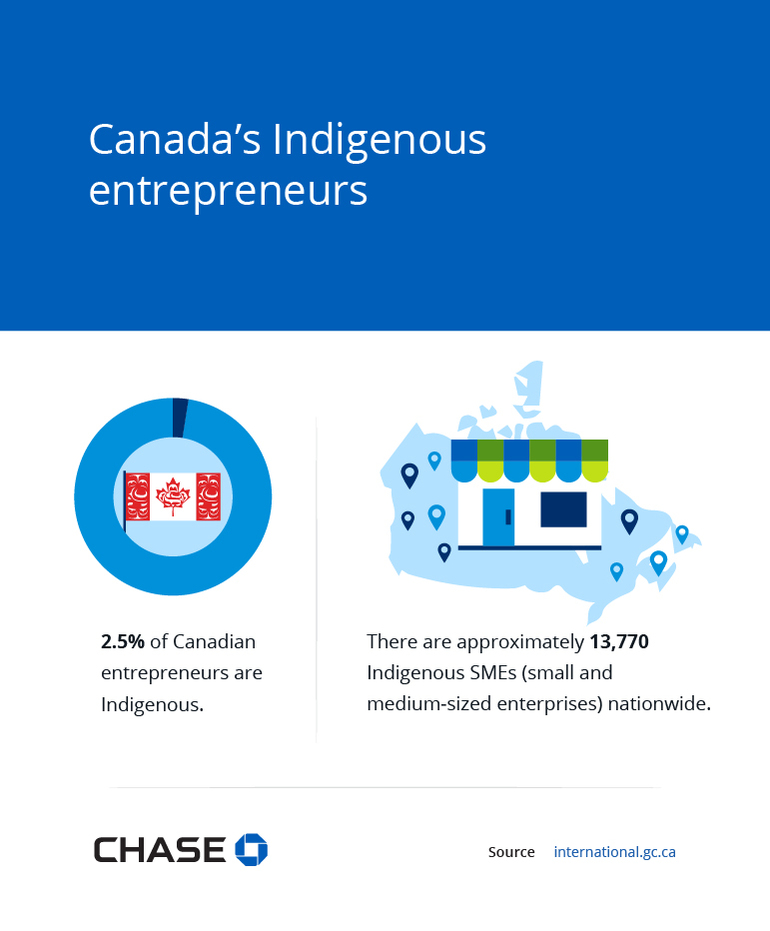 2.5% of Canadian entrepreneurs are Indigenous.

There are approximately 13,770 Indigenous SMEs (small and medium-sized enterprises) nationwide.

A great way to support and celebrate this historically overlooked yet deeply beautiful segment of Canada's population is to help their entrepreneurial pursuits.

The simplest way to support Indigenous entrepreneurs is to spend money at their shops, restaurants, etc. You can search for Indigenous-owned businesses through platforms such as Shop First Nations. You can also find them through curated roundups from online publications that feature small businesses, such as ones by Yelp, Slice, and Narcity.

Financially supporting Indigenous small businesses is an important first step. But there are other ways you can help these entrepreneurs survive. For instance, try giving a business a social boost by posting a positive review on their Google Business page, Yelp page, or social media.

Studies reveal that social media can have a huge impact on brand loyalty, sustainability, and brand effectiveness. By writing a glowing review, you can boost the visibility of an Indigenous company and help them in the long run.

Falling in line with the previous tip, you can help elevate Indigenous brands, influencers, and small businesses you like by following them on social media. You can also discover similar brands and companies by performing a simple hashtag search or using social media search tools.

Some Indigenous companies face barriers in accessing the tools, resources, or infrastructure to launch a successful business endeavour. These barriers include (but are not limited to) discrimination, lack of federal funding, and education.

If you're a small business owner yourself, you can also tap into your knowledge on how to get federal funding, grants, and financing available to these entrepreneurs.

Look for opportunities to volunteer with charities and organizations devoted to the prosperity and well-being of Indigenous communities. These include the Aboriginal Business Entrepreneurship and Skills Training Program, Aboriginal Financial Institutions, the BC Indigenous Economic Development, and the Indigenous Business Advisory Centres. You can also consider volunteering with Small Business BC and see what initiatives they have to support Indigenous small businesses.

A full list of organizations can be found through British Columbia's Indigenous Small Business Resources.

One of the best ways to celebrate this historically overlooked, yet deeply beautiful segment of Canada's population is to help their entrepreneurial pursuits.

Always remember that Indigenous small businesses are varied and diverse. They can and will reflect the wide spectrum of Indigenous experiences in Canada.

It's important for both small business owners and consumers to recognize the multitude of barriers that Indigenous entrepreneurs regularly overcome, from launching their small businesses to sustaining growth and finding success. As they continue to write their own history, Indigenous business owners remain a fundamental piece of Canada’s national identity. By supporting their ventures, we amplify their cultural and economic contributions—not just during the National Day of Truth and Reconciliation, but year-round.

Chase's website and/or mobile terms, privacy and security policies don’t apply to the site or app you're about to visit. Please review its terms, privacy and security policies to see how they apply to you. Chase isn’t responsible for (and doesn’t provide) any products, services or content at this third-party site or app, except for products and services that explicitly carry the Chase name.